The art of the taper

I guess I’ve finally reached the point where I’ve been doing this runner thing long enough that I no longer stress very much about training for a specific event. At distances up to and including a half marathon, I can pretty much be ready to race with only a few weeks of focused training effort. Or it seems that way to me anyway, at the moment.

Last Saturday I did what I call my “dress rehearsal” for NODM — I ran essentially the last 11 miles of the course, give or take a short dogleg. I ran it at race pace (it actually would have been PR pace) and I finished feeling really, really strong. At the time I wondered whether I might have overdone it, but I came out of it feeling just fine. I was helped immensely by absolutely perfect weather — overcast, calm, and 55 degrees — which definitely contributed to how easy it felt. I doubt I’ll be as lucky weather-wise on race day, but I’ll have the always-helpful adrenalin factor to help carry me through.

So now I’m contentedly welcoming the taper. Over the next week and a half, I’ll run shorter distances with less intensity. I’ll try to limit my other activities, or at least try not to go all-out (as I write this, I’m looking forward to an e…a…s…y……. 15-20 miles on my bike this afternoon). I’ll try to eat well and get lots of sleep. I’ll try not to stress out when the scale tells me I’ve gained a pound or three: it’s all that glycogen and water I’ll be storing in my muscles!

I’ve generally taken a rather scientific approach to my running — the thoughtfully designed training plan, the carefully logged miles, the focus on the numbers — but I’m coming to see that there’s an art to it as well. Sometimes, when I don’t feel like running, the best thing to do is take a few days off. When I’m fed up with pushing the pace, it’s okay to slow down. My baseline fitness is now good enough that I can give myself those little breaks and still be ready on race day.

There’s an art to this running thing, a beauty and grace that I’m finally beginning to grasp. The other activities (cycling and hiking and walking almost everywhere I go around town) that also occupy my time and interest these days have helped show me this. It all has to do with living an active and healthy life. It’s not just about what happens on race day. It’s how I feel the next day, the next month, the next year. It’s getting out of bed every morning, feeling alive and eager to be out there and moving in the world.

It’s the overall, constant rhythm of activity that matters.

Learning to love the taper

The Victoria half marathon is now only seven days away, which means that I’m well into taper mode. My last few weeks of training have gone well enough. My longest long run was a solid and steady 11-miler back on September 20 (V minus 22 days) followed on 9/30 (V-12) by a very brisk 9-miler.

I have mostly focused my recent training on pacing. I’m feeling very strong (for some odd reason!!) so I’m having to fight the urge to go out too quickly, which always only results in tiring too much in the later miles. To train for my race strategy, I’ve practiced staying steady on pace during the first half and then making each mile in the second half just a little quicker. For the most part I’ve been successful doing that.

Over this past week my focus has turned to rehearsing for race day itself. I confess that now that I’m no longer working, I’ve developed a very casual attitude toward mornings… as in, I don’t do them at all! I’ve never been a morning person, but these days if I’m out of bed before 8:00, that’s early. But the race will start at 7:30!

So for my last two runs, I have set the alarm and made myself get up. On Friday, I had it set for 5:40 and managed to talk myself into getting up at 7:00.

Unfortunately I can’t simply wake up, go out the door, and run. There is food to consider, and there are morning rituals. My goal for this week’s running has been to duplicate as many aspects of race day as possible.

I know from experience that if I’m up three hours before the start of the race, and if I’ve finished eating two hours before, my stomach will usually allow me to run without too many complaints. I also know from experience that a banana or two along with a slice or two of bread and a cup of coffee will usually work well for me on race day, provided I’ve eaten well (three cheers for pasta!) the night before. So — despite the fact that I really don’t like bananas at all — I’m eating bananas.

The other good thing about bananas is that I can usually find them in Victoria. Running this race means international travel — albeit only 20+ miles across the strait. I’ve learned what foods I can and cannot bring with me into Canada. I’ve never had any problem bringing a few slices of bread, but fruit? Yogurt? I’m not even gonna try. But there’s a little deli restaurant along the way from the ferry dock to the motel, and I’ve never failed to find a bowl of bananas there. They might cost me a dollar or more apiece, but I’m reasonably confident that I’ll find them there.

I plan on running just one more time between now and next Sunday. I’ll set my alarm for 4:30 on Wednesday. I’ll eat a danged banana or two and then I’ll go out and run 4 or 5 easy miles starting at 7:30, just moments after sunrise.

I was thinking about this whole taper thing while I was running this morning. I was thinking about how nice it is that I don’t freak out about it anymore. I no longer talk about “taper terror.” It’s not that I’ve become blase, but simply that I now know what to expect. I know I’m going to be anxious. I expect to gain a pound or two. I’ll have nightmares and butterflies and at some point I’ll become convinced that I’m going to fall apart. Or not. Whatever. On race morning I’ll be an insufferable basket of nerves, but I’ll somehow get myself to the starting line and I’ll run.

I’ve done this. I know how it works. I know I can do it. The nerves and the spreadsheet obsession are simply parts of the process for me.

Within the next week, I’ll pass two life milestones. One is a birthday — my 59th — and the other is the 6th anniversary of the day I first stepped onto my new treadmill and pronounced myself a “runner.” I put those two numbers together and marvel at the fact that I’ve been running for more than 10% of my life. Given that, I guess it’s about time I figured out a few of the tricks of the trade, right?

This morning I took some time after finishing to look around and enjoy the beautiful morning that I wouldn’t have otherwise seen. 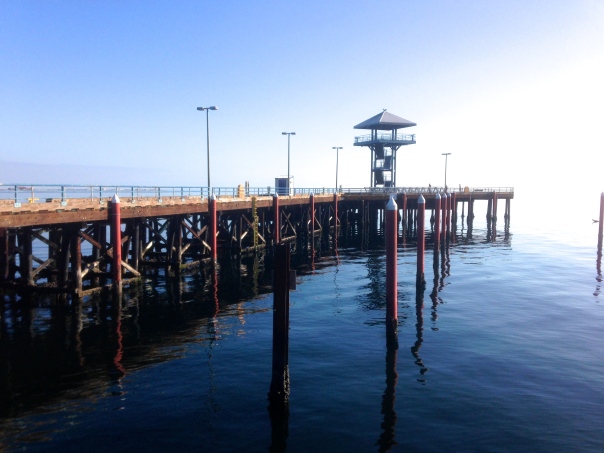 It was worth getting up for! I could learn to love this.

One step at a time!