If I’m going to run, why not do it in style?

This morning, for the third time in a row, I woke up before my alarm in eager anticipation of “run day.” As today was Sunday, that meant LONG RUN DAY, and I had planned to do 8 miles, which would be my longest run since the Victoria half marathon back in October. I didn’t want to repeat my last week’s mistake of overdoing the hills while in quest of architectural wonders, so I decided to stay on the flat streets and head down toward the park where the Palm Springs half marathon will start and end in February. From there, I thought I might try to retrace some of the race route and also check out the other architectural wonders in that neighborhood (yeah, I’m hooked).

The park is almost exactly a mile from my condo, so I’ve decided that on February 12 I’ll actually do at least 15.1 miles on foot. I figure walking to the park will be a great opportunity to warm up and work off some nervous energy before the start, and walking home will stave off some of the post-race soreness for a while.

I ended up running 8.12 miles today, and I did manage to find Frank Sinatra’s first PS house in the process. It hadn’t moved; I’d just forgotten exactly where it was. I have no clear memories of the last two miles of this race when I last ran it in 2010. I probably ran/staggered past that house but I had pretty much hit the wall at that point. Today I played my way through that neighborhood, turning this way and that and enjoying everything that I saw along the way… lots of runners and walkers, friendly smiles, glimpses of amazing houses behind hedges and gates.

I’d aimed for an 11:30 average pace, actually ran 11:21, my last mile was the fastest, and I wasn’t especially tired when I got home. I strolled over to the pool area, picked some tangerines, and retrieved my mail from my mailbox.

GOOD STUFF had arrived! I had ordered a couple of One More Mile shirts (I love their goofy slogans), and they arrived addressed “to the wonderful Lori etc.” Then when I opened the outer package, I found this (my cat Salsa was especially impressed): 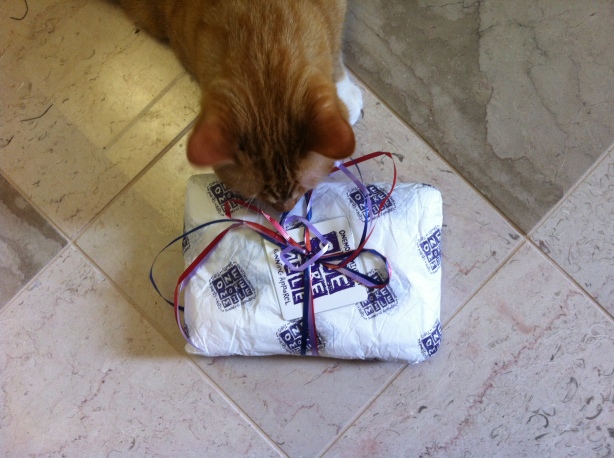 Gift wrapping! How cool is that? My cats have been fighting over the ribbon all day.

I needed these new shirts to go with my totally awesome new Oiselle Distance running shorts in lovely orange. While it’s not yet warm enough to run in these, I’ve been craving them ever since The Thinks I Can Think blogged about them on several occasions. Oiselle also has a style called “Lori,” which should have been my obvious choice, but I wanted the Distance shorts because they have ZIP POCKETS large enough to fit my iPhone, which means that I can run without a waist pack, which should be good for 1 or 2 seconds a mile right there.

My knees and left hip are doing better and I’m looking much more runner-ish thanks to my new CW-X 3/4 length Stabilyx compression running tights. This is the same brand as I’d bought for the cold, after-dark beer runs, but shorter and lighter weight for the mid-50s running conditions here. By February, it will already be getting too warm for these, hence the need for awesome orange shorts. For knee support I’ll have to return to my old unstylish knee braces, but at least I’ll have orange shorts.