Belated race report: I finished. And then…

The Yakima River Canyon Marathon turned out to be quite a bit hillier (translation: more challenging) than their website led me to believe. Isn’t that the way it always seems to work?

On Saturday, April 2 I was up at just after 4:00 AM. The worst of the coughing seemed to be behind me, and I was optimistic about how the race might unfold.

The bus from our motel in Yakima to the starting line left just after 6:00. We got to the gathering point at a motel in Ellensburg a bit before 7:00, with lots of time remaining before the 8:00 start. It was cold, around 45 degrees. Fortunately there was a large room in which all 218 of us were able to gather and stay warm.

We had to walk about a quarter of a mile to the starting line. Knowing that it was going to be warm later, I put my jacket and gloves in my gear drop bag, but decided I’d wear my Buff (headwear) to keep my ears warm at the start.

The first three miles took us through a couple of loops. My heart rate was elevated right from the start; I hit 160 in mile 3. So I started taking walk breaks almost immediately. I also coughed a fair amount and did some spitting, especially in the early miles. Then as the air warmed up and dried out, my breathing improved.

After the loops we headed into the canyon, starting with a slight uphill. By mile 4 it was getting warm. I took off my Buff and stashed it in my back pocket. I was smiling and looking fresh at that time! 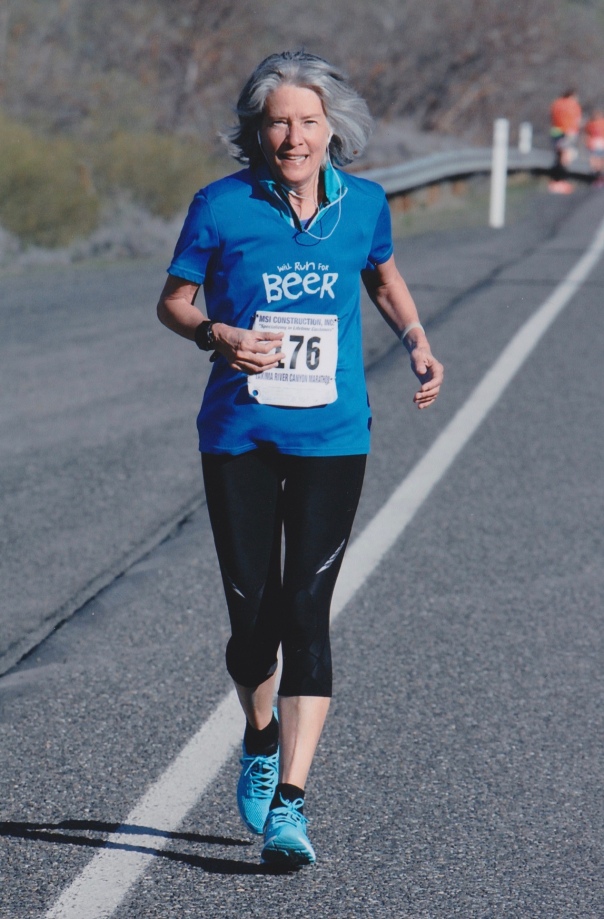 It was up and down, but slightly more down than up, over the next few miles. The highlight of the first half was mile 6, which I finished side by side with Kathrine Switzer, who had been the keynote speaker the night before. She was meeting runners and running with them for a short time. That was fun! No, beyond fun, it was an HONOR to run with the legendary Kathrine Switzer. If you don’t know who she is, you should Google her right now.

I did some serious self-assessments and decided that since it was warm enough that my heart rate was spiking to 160+ (as high as 167) every time I tried to run, and since my legs felt so rubbery, that I would just walk for a while. I figured I could probably walk ten more miles, but I wasn’t sure I could keep running for that long without my legs just collapsing. So I walked. I walked the next 5 miles at about a 14:00 pace. I had no idea I could walk that fast and I was very pleased by that. But then I started to get a side ache and I could no longer maintain that walking pace. I had to slow down.

It got very warm. At some point it finally occurred to me that I could soak my Buff with water at the aid stations, and get some cooling effect. So I did that and put it back on my head, and kept it there until just before the finish line. It helped.

My finish line photo is more of a grimace than a smile. By the way, I was NOT flipping off the photographer, but I was obviously very tired and flailing around wildly.

I was (and am!) very happy simply to have finished. I was recovering from being very sick, and it was warmer and much hillier than I’d hoped. It was about 75 degrees at the finish line.

I’m certainly a little disappointed with my race TIME of 5:39:46, but I’m not at all unhappy with my strategy to finish it — given my circumstances — and with my success in actually doing so. I have no wish to run another marathon any time soon, if ever. Marathon training is hard. My body was tired and needed a good long rest.

Unfortunately, that isn’t what I gave it. As soon as we got home from Yakima, I put myself through another trial. At some point, months ago, I had decided that scheduling a screening colonoscopy for three days after a marathon would be a good idea.

I lost a couple more pounds, of course, but that wasn’t the end of it. My cough returned with a vengeance, along with a low-grade fever. For the last four days or so, it’s been all I could do to get out of bed. Although I hate to admit it, it’s now time to seek medical attention.

The Yakima River Canyon Marathon really is an intimate race in a beautiful location. The race organizers and volunteers are absolutely world-class with their hospitality and their support. It’s a reunion race for many old-timers who’ve run hundreds of marathons over many, many years. But it’s not an easy race. One runner, who had chosen this to be her 500th marathon, declared it to be one of the more difficult ones she’d ever run.

I’m glad I did it. But I think I am cured, for a good long time (I hope forever) of the urge to run any more marathons. My body has spoken and for once, I’m going to listen and take heed. Hurrah for half marathons!

Posted on April 11, 2016, in Running and tagged marathon, running. Bookmark the permalink. 11 Comments.