It’s the 9th day of the month again. Today marks eleven months since Kurt died. Although grief is no longer at the forefront of my thoughts every day, I still feel sad as each of these small anniversaries approaches. This one seems especially poignant because the next one will be a full year.

At this time last year, I was packing up our things and preparing to drive Kurt and our three cats home from Palm Springs where we’d spent the late winter and early spring. Although he’d been under continuing care (read: “endless chemotherapy”) from a local oncologist, he was clearly getting sicker and weaker. He told me when we locked up the condo and left on May 15 that he didn’t think he’d ever see it again. I said, “Of course you will!” I was trying to be strong and I so badly wanted him to be strong and keep fighting. Perhaps, instead, I should have encouraged him to talk about it, at that moment when he might have still been able to have such a discussion with me.

No, I won’t second-guess my own actions from that time. We all do what seems like the right thing to do at the time.

And the mile markers go by, one after another.

My favorite running place, the Olympic Discovery Trail, has both mile markers and half-mile markers. I don’t look at them much these days, but they do serve as reminders to glance at my watch. I keep getting faster. I’m still not quite sure why I’m getting faster, or how much faster this slow happy runner is capable of going.

Since I started running three and a half years ago I’ve now run 1,577 miles, which is 534 more than last year at this time. I’ve probably run a million steps, give or take a few thousand, over the past year. One step at a time.

I have handled hills, rain, and gale-force headwinds. I can go out now and run ten miles at a constant pace that I couldn’t have done for even one mile a year ago. The next day I’m not sore. I’m amazed that I can just go and do a run like that and feel perfectly normal afterward.

Life goes on. I am not the person that I was a year ago. I will always have “Kurt’s widow” as a deep part of who I am, but I am not only that person. Every step, every mile, every corner turned and bridge crossed, takes me further beyond the life we shared.

My last post was about a bridge on the Olympic Discovery Trail, and it brought a question about whether this was an old railroad bridge. That particular bridge is a new one, but the trail is indeed on an old rail right-of-way, and some of its many bridges are indeed railroad bridges. After my run the other day I stopped to take photos of one of these; it’s just west of mile marker 5. Colleen, this is for you: 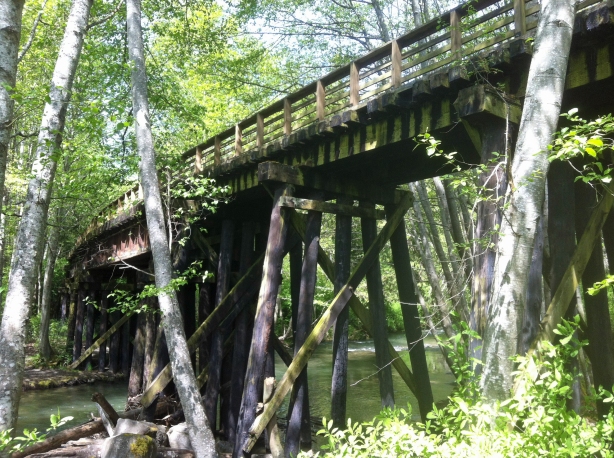 While on a bike ride back on April 27 I stopped in the middle of the bridge to look down at the stream. There was a bunch of wood and other debris caught in an eddy current and in the process of getting hung up on the downstream side of the bridge. I watched for a long time as a discarded green plastic bottle swirled around, each time looking like it might escape and float downstream, and each time becoming more entrapped by the debris. Each time I have crossed the bridge since that day, I have stopped to look for the bottle. Each time, it was still there.

Today the bottle was gone. There was still a debris dam there, but the green bottle had somehow escaped and floated on downstream toward the mouth of the stream a mile away.

Time passes. Things change. Mile markers approach and then fade behind us.

Life goes on, one step at a time.